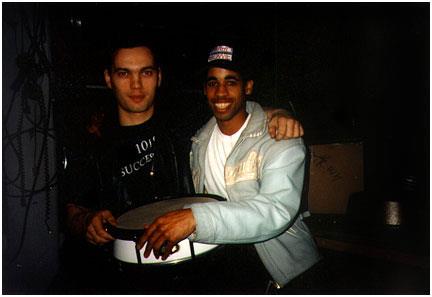 Sterling Campbell (b. May 3, 1964) in New York City, New York, is an American rock drummer who has worked with numerous high-profile acts.

He rose to attention in 1986, touring with Cyndi Lauper on her her True Colors World Tour, in 1986, and in 1987.
He was a member of Duran Duran from 1989 to 1991. and he was hired to tour with the band during the promotion of Big Thing, and was made a full member of the band at the end of the year. He contributed to the recording and promotion of Liberty, then was asked to leave after he failed to get involved for preparations for what would eventually become The Wedding Album.

Campbell was hired first as a session player in 1991, by Soul Asylum, playing on half of the songs that saw their 1992 release, Grave Dancer’s Union garner fame and a Grammy Award for the single, “Runaway Train“, resulting in him securing membership with the band afterward, upon the firing of then-drummer Grant Young, playing with them from 1995 to 1998.

He began recording with David Bowie as early as 1991 and given the opportunity to join his house band, grabbed the opportunity and followed through with Bowie by touring with him throughout the early 2000s, until the end of his “A Reality Tour”, in 2004.

Campbell has worked with artists as varied as: TM1 polished Aluminum SALE is on, visit our websit

SALE is still on! www.firchiedrums.com

Load More... Follow on Instagram
We use cookies to ensure that we give you the best experience on our website. If you continue to use this site we will assume that you are happy with it. Ok