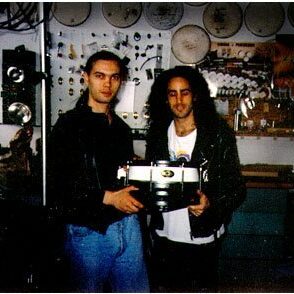 He was raised in the Boston area and began playing drums at age thirteen. His focus since he began playing has been to see the world via touring and work steadily as a freelance session musician.
His style allows him to play in genres such as rock, soul, R&B, heavy metal, jazz fusion, funk, punk, rap, hip hop and pop. As an engineer and/or producer, Mover has worked with Shakira, Flo Rida, Brett Scallions, Rick Ross, Fuel, Carnival Divine and French guitar virtuoso Rudy Roberts among others, as well as being the engineer and sound editor on Loose Change 9/11: An American Coup.

Although Mover works primarily in the studio, he can be seen on the road these days touring with The Tubes, subbing for their drummer Prairie Prince.

Primarily self-taught, Mover studied very briefly at Berklee College of Music until seeking out private study with Gary Chaffee before moving to London in pursuit of his dream. Shortly after, Mover landed the gig with Marillion, immediately flew to Germany without rehearsals to play on their live release For All Cucumber Lovers and then headed straight to Rockfield Studios in Wales to help write material for Fugazi.

Fortunately, Marillion was a short-lived situation, allowing Mover the opportunity to team up with Steve Hackett of Genesis and Steve Howe of Yes to start the supergroup known as GTR. The trio then recruited lead singer Max Bacon and bassist Phil Spalding. After one successful record and tour, Hackett called it quits, as did Mover, since his allegiance was to Hackett. Not long after, having played a gig with Steve Vai and Joe Satriani, Mover accepted the offer to work with Satriani and made the move back to The States after nine years in London. He settled in New York City and still resides there.