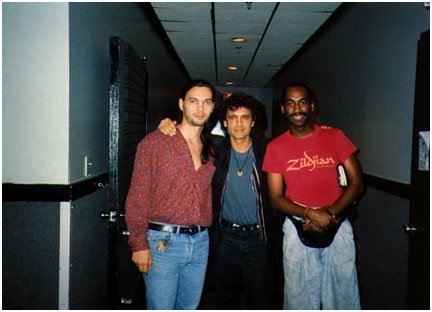 Widely acclaimed for his versatility, technological prowess and groove, Omar Hakim is one of the most successful drummers and session men of the past thirty-five years. He has collaborated with artists ranging from Miles Davis to Madonna, and has left his imprint on hundreds recordings including several under his own name.

Born in New York City to a musical family, Omar began playing the drums at age 5. At the age of ten, he was performing publicly with his father Hasan Hakim, a trombone veteran of the Duke Ellington and Count Basie bands. This period formulated Omar’s traditional and improvisational jazz drumming techniques, and built a strong foundation for his unique drumming style. His father’s friendship with John Coltrane enabled young Omar spend time with Elvin Jones and Art Blakely. And at age 11 he studied with (then Count Basie big band drummer and master technician) Clyde Lucas. This expertise in the Jazz tradition is what attracted band leader Mike Manieri to hire Omar and Music & Art HS classmate and future bass star, Marcus Miller for the Band Steps Ahead in 1980.

Seeking to broaden his horizons and implementing Duke Ellington’s theory that, “there are only 2 types of music… good and bad”, he successfully branched out into other genre’s of music. Allowing him to balance and develop a career that bridged many styles of music in a way that no other drummer before him had ever done.

After seeing Omar’s versatility, Mike Manieri (who was also producing Carly Simon) hired him to play in her touring band in 1980. He went on to record and tour with Gil Evans Big Band, David Sanborn, Patti Labelle and many others. Soon after, he filled in for a tour of the groundbreaking fusion band “Weather Report”, a job he would keep permanently until the band’s breakup in 1985. In addition to the three albums he recorded with Weather Report, he also landed a gig playing on David Bowie’s 1983 return to the American pop charts, “Let’s Dance”.

His early successes led to many more high profile engagements and by the end of the 1980s, Omar had performed on landmark recordings with artists such as Miles Davis (Tutu, Music from Siesta), Dire Straits (Brother in Arms, Money for Nothing) and Sting (Dream of the Blue Turtles, and the popular “Rockumentary” movie Bring on the Night). His drum solo in Sting’s movie on the song “I Burn For You” is considered by many fans and critics alike to be one of the greatest drum solos to be documented on film. It was a powerful and virtuosic jazz drum solo in the middle of a rock show that took fans by surprise and excited them to respond with standing ovations every night of the tour.

Building on these successes, in 1989 he even found time to produce and release his first solo album, Rhythm Deep, which earned him his first Grammy nomination. In the Nineties he toured with Lionel Ritchie and International Pop Superstar Madonna for 8 years. He was also a founding member of the Jazz Super Band “Urban Knights” along with Ramsey Lewis, Grover Washington Jr. and bassist Victor Bailey. The band featured his songwriting and vocal skills.

Omar was also exploring the latest advances in electronic drums and keeping up with the newest recording and percussion technologies. He was so excited about the Roland Musical Instruments Co. development of the “V-Drums” that he became the first international spokesman and adopter of that technology. His versatility put him in even greater demand, and his eclectic interests kept him busy in the pop, jazz, rock, fusion and R&B worlds.

Using V-Drums with Madonna on one hand and recording and performing on acoustic drums with Hank Jones Great Jazz Trio, he further established himself as a major innovator on his instrument.

Omar has collaborated with dozens of prominent artists including: